Susan was lucky to catch Cora Staunton for a quick chat. With her refreshing down-to-earth attitude, Cora talks about the sports skills that transfer to life and business.

Listen to Cora Staunton on the life skills she learned on the pitch:

The first thing that strikes you when you talk to Cora Staunton is how down to earth she is. The fame, people recognising her in the street, and now the book, her autobiography - she takes it in stride because it is part of the job, but the pitch is where she wants to be.

Still, she will always take the time to have selfies with fans or sign autographs - or answer interview questions like mine, and she does so with exemplary patience and goodwill. 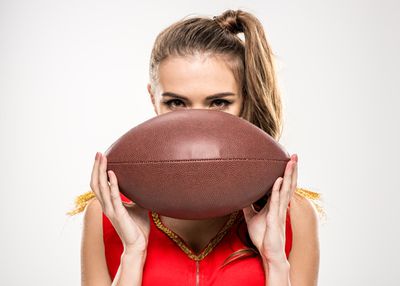 Cora Staunton needs no introduction. The Gaelic footballer has earned probably all the accolades that an athlete can earn in GAA. She has also made her mark in Australia, with the Greater Western Sydney Giants.

Cora started out in Carnacon, in a small national school where the principal encouraged every child, boy or girl, to be active and join a team. Cora found that Gaelic football was what she loved. She joined a boy's team.

On the pitch she is incredible: her powerful game has earned her the nickname "the machine" among her Australian teammates.

Listen to Cora talk about discipline and resilience, how the lessons learned in sports can be applied to life, and why it's important for women to support women.

Discipline and resilience are skills

Something you'll hear Cora say in the interview is that discipline and resilience are skills: they're not fixed character traits. You can learn to be more disciplined and more resilient through practice. Cora reflects on how sports and her intense training have helped her practice those skills, and when she needed them in her life.

Always be driven to improve

Cora also talks about failure as fuel for ambition: in a sporting career, however impressive, there will always be more defeats than wins. How you deal with them is what reveals your character. The defeats make you more driven to succeed - if you didn't make the team, then the next goal is making the team. If your performance wasn't up to par, then improving your performance is the next thing. Cora talks about this life of constant effort and improvement with simplicity - it is the life she has chosen, with the moments of explosive joy, as well as the more difficult times and the need for relentless work.

When Cora was a young girl, there weren't any female GAA players she could identify with - so she took male GAA players as her role models. Today, she doesn't let fame get to her head, but she knows she can use it to show young girls that there's a place for them in sports. I couldn't agree more: it's absolutely essential for each of us to be aware that we can be role models to others, and that we can choose role models to accelerate our success.

Listen to the interview: