During last week's Views, I put forward an array of statistics highlighting the impact of gender diversity on their own bottom line and within that, I considered some major global research from authoritative bodies. 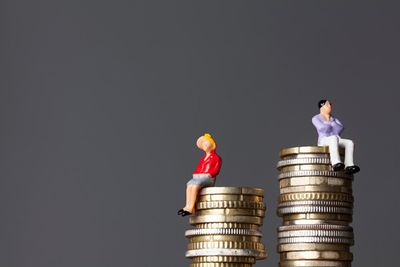 During last week's Views, I put forward an array of statistics highlighting the impact of gender diversity on their own bottom line and within that, I considered some major global research from authoritative bodies.

Here's some more data, if you want further backup to this theme:

"Research analysts from The Wall Street Journal ranked companies in the S&P 500 based on 10 metrics related to diversity and inclusion performance. These metrics included the share of women in leadership roles, the presence of diversity and inclusion programs, and board demographics. The 20 highest-performing companies in the ranking generated a higher operating profit margin (12%) compared to the lowest-ranking companies (8%). "

In the most recent episode of Fantastic Female Fridays, I sought to really delve into this and examine the connection as well as determine how to invest accordingly.

However, before I started this conversation, I felt it was important to reflect on my own experience with VectorVest. Did I feel held back from opportunities as I was a woman? That's an emphatic "no". On the other hand, did I feel the company encouraged me to come forward for opportunities? Again, that's a certain "yes". After all, the "Fantastic Female Fridays" show is a manifestation of that. However, the real test of encouraging diversity is when one is "tapped on the shoulder" for the hidden opportunities that one doesn't even know exists. For that too, I'm very grateful and long may they continue!

Moving from statistics and stories, how can we turn this economic and social insight into an investment case? Last week, I highlighted the State Street "SHE" ETF and here are three more:

A globally focused fund tracking companies "that demonstrate high levels of Diversity, Inclusion and People Development, and low News controversy". It has a Total Expense Ratio of 0.25% and the it's March 2020 to March 2021 performance was a sparkling 54.89%

This is an ETF passively investing in an index comprised of "designed to track the top companies leading the field internationally in terms of gender equality" with another very impressive past year's performance of 57.06%. There are 11 countries in the index.

This ETF is modelled on "an equally weighted benchmark of 150 companies from around the world that score highly for gender equality. There is £36 million assets under management in this ETF which delivered a huge return of 59.33% featuring the financial and consumer discretionary sectors as the two largest of the fund.

As I took the audience through this and we looked at the holdings of each one, we could see some repetition of the companies quoted. We saw Nordstrom, GAP, Johnson & Johnson, Disney, Netflix and a range of others. We decided to apply a layer of VectorVest magic by putting the top ten holdings of the SHE ETF into a watchlist and then examining the average CI, VST, GRT and RS. In this way, we could weave the demonstrable business case put forward by gender diversity, the ETFs at our disposal and refine our choice according to the type of investor we are.

Specifically, as you can see in the episode, we put the top ten holdings of the SHE ETF in a Watchlist. By the end of the day, the average VST of those top ten stocks were 1.17, the CI was an intriguing 1.45 and the GRT was 14%. The cumulative weight of these ten stocks make up 39.39% of the $229.24 million assets under management, so it's a useful way to truly critique the contents inside the box.

If you're interested in these types of social trends and investment cases, our new ESG and Tech show is going to be right up your street. Register for updates at www.vectorvest.com/fff!