WHO SPENDS THE WORLD'S MONEY?

According to Forbes magazine, "women make up more than half of the U.S. population, and control or influencer 85% of consumer spending". 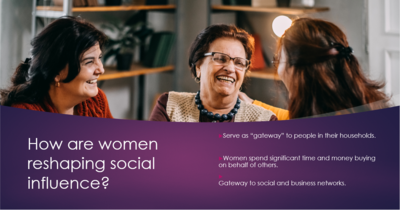 WHO SPENDS THE WORLD'S MONEY?

According to Forbes magazine, "women make up more than half of the U.S. population, and control or influencer 85% of consumer spending". During this episode of Fantastic Female Fridays, I sought to answer where women are diverting this spending, which companies are answering that call, the future trends of these spends ... as well as how investable those companies are.

One might question how the 85% is so disproportionately high given the less than 50% representation that women have when it comes to global earnings. However, that's where one needs to discern the difference. Women serve as "gateway" to people in their households, spend significant time and money buying on behalf of others and they continuously act as a gateway to social and business networks through public social media (i.e. Instagram), private social media (i.e. WhatsApp groups) as well as simply helping out friends and family. Mindshare/Ogilvy & Mather state that 92% of women pass along information about deals or online recommendations to others. As per "Impact of Gender on Consumer Purchasing Behaviour" in the IOSR Journal of Business and Management, "women consider shopping is a social need whereas male consumers pay importance to the main function of a product instead of secondary function". 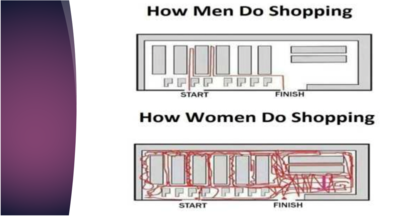 In order to get closer to the investable perspective of this point, we need to consider the various sectors where women are particularly active. According to Yankelovich Monitor & Greenfield Online), women affect or influence: 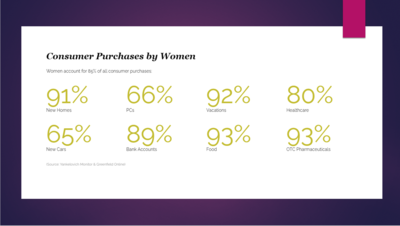 Therefore, those that have "business to consumer" business models need to appeal to women and take good care of them. During the episode, I showed a video of a tear-jerking Proctor & Gamble (PG) ad with the tagline "Thank you Mom" as an example of a brand that made a real connection. We'd discussed the Nike's #betterforit advertising campaign that powers women to be better through services, product innovation and athlete inspiration, motivating each other to push to the next level." In Europe, I gave examples of L'Oreal's "You're worth it" slogan as well as Addidas's Adigirl clothing line. In another sector, we talked about Bumble's prioritisation of female needs and preference in the online dating world. Finally, we rounded it off by examining the range of consumption sector's representations within ETFs including XLP (Consumer Staples Select Sector), IYK (iShares US Consumer Goods ETF) and VDC (Vanguard Consumer Staples ETF).

Join me for the next episode of my other VectorVest show focusing on ESG & Tech whereby I will take you through the ways we're using the Internet of Things to make the property more sustainable.

Sign Up for our regular Savvy Women Newsletters by clicking here