Ashleigh O'Hagan is a gymnast and Special Olympian. She talks about finding role models in unlikely places and never giving up on your dreams. 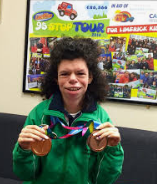 Ashleigh O'Hagan is a gymnast, she won two bronze medals at the 2015 Los Angeles Special Olympics. Ashleigh has to cope with Williams syndrome, a genetic condition that is accompanied by cardiovascular disease, developmental delays, and learning disabilities.

I happened to meet Ashleigh by chance while staying at a hotel in the Burren recently, and she very graciously agreed to an impromptu interview!

Imagine finding your passion in something that is not just difficult, but incredibly difficult. Imagine that what you love doing the most is something that requires tremendous effort, discipline and sacrifice.

And still, the only thing that matters to you is that you love doing it, period. Ashleigh reminds us that enjoying the process isn't optional when you go after your dreams: it doesn't have to be a long hard slog, even when it's hard.

Celebrate the small wins, because they snowball into huge wins.

Listen to Ashleigh's pure joy as she talks about her passion: "I can't do that now, but in a thousand times I can do it".

Ashleigh's role model is Kimberly Hart. You know, the Pink Power Ranger. Armed with the inspiration provided by a fictional character, Ashleigh went on, not just to compete, but win a medal, twice (as well as several place ribbons), in an international sports competition.

This idea is very close to my heart: choosing a role model will boost your success. Who the role model is matters less than what you choose to do with the inspiration.

And don't forget that you, too, are a role model. What will you inspire others to do?

Being realistic is overrated

Ashleigh talks about her long list of dreams and she is confident that she will achieve them. Don't let "being realistic" hold you back. "Being realistic" is very often just a disguise for "being afraid what others will think of us".

Moreover, what counts as "realistic" today will be out of touch with tomorrow's reality. Second-guessing your inclinations just to match the perceived state of the market or the job market can backfire. You're much better off being true to yourself.

Savvy Podcast: Being true to yourself

Two sides of the same coin: fear of failure, fear of success.