Use that goal to make every decision: Joan Mulloy, solo sailor

Joan Mulloy talks about taking leaps of faith and managing your emotions to stay on course when the seas are rough!

Joan Mulloy, Professional Solo Sailor, wants to be the #FirstIrishWoman in the Vendée Globe

"Don't underestimate yourself - if you have something that you want to do, keep that goal in clear focus in your head, use that goal to make every decision." 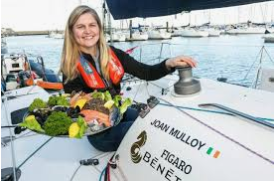 My guest on this podcast is Joan Mulloy, a professional solo sailor. I was honoured to interview her and a panel of incredible people for her fundraising event: Joan is raising money to be the #FirstIrishWoman to compete in the prestigious Vendée Globe, a solo, round-the-world sailing race. Joan successfully met her crowfunding goal on IndieGoGo, raising over €17,000 in just a few days.

The life of a professional solo sailor is difficult to imagine for us "landlubbers": Joan shares her time between gruelling training, and finding sponsors for her races. Sailing is a very different world on the surface, but deep down it is very similar to the stories of other Savvy Women. Even though Joan sails "solo", she says "we" all the time, as she has needed to surround herself with a wonderful team to manage her campaigns. When she's not battling rough seas, she is writing proposals, just like any business would.

"The mental leaps I've made in that year are massive."

In August 2017, Joan Mulloy left her job as an engineer. She had loved the sea and sailing ever since she was a child. She spent every single day of her annual leave sailing. Despite this, she says, "I hadn't really considered sailing as a profession... There was this realisation that you could earn a living through your hobby." Listen to Joan as she describes the elation and the excitement of leaving her job and taking this leap of faith.

Can you picture being alone at sea for 90 days?

Joan is working on qualifying for the prestigious Vendée Globe race, a solo, unsupported, non-stop, around the world sailing adventure. It's the ultimate test for a professional sailor - no other race is more difficult. Only 66 people have ever completed it. In fact, more people have been in space than have completed the Vendée Globe! Only 8 women ever competed in it, and only 6 women finished it: you might have heard of Ellen MacArthur and Isabelle Autissier.

The only other Irish person to have competed in the race, in 2016, is Enda O'Coineen, Joan's mentor. There is a point in the race when you're so far out in the ocean by yourself, that apart from the other competitors, the nearest human being to you is on the space station... The race happens every four years; it's taking place this year in 2018, and after that, the next edition will be in 2020. Joan is putting her every effort into qualifying for 2020.

What happens when things go wrong?

In order to qualify for the Vendée Globe, Joan competed in the Solitaire Le Figaro, another solo sailing race. When you're sailing solo, you are the only one on deck - everything rests on your shoulders. You have to battle exhaustion, sleeping only 3 or 4 hours every 24 hours, and face rough seas, making crucial tactical decisions while tired and under a lot of pressure. On the second leg of the race, her main halyard failed on the start line, and she lost several hours fixing it.

So what do you do when things go wrong? Listen to Joan as she recounts trying to keep it all together, continuing to go through her checklist, all through tears of exhaustion and frustration: "Your energy, mental and physical, is a precious resource, and you can't waste it being super upset or panicked, or throwing yourself into a solution that's not going to work."

Joan might be a pro sailor, but she knows she works in sales - as we all do.

Joan's website, where you will find regular updates of her sailing adventures, is JoanMulloyRacing.com